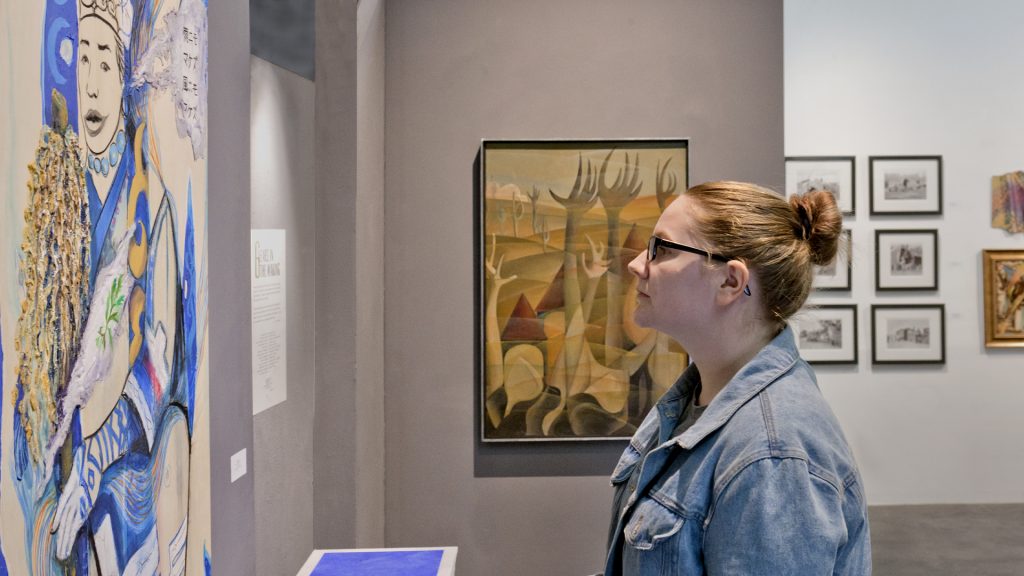 “Ame ni mo makezu” is a painting from the series of Avatars from “Hidden Wings Temple” project. The Ajnu shaman is one of 12 images of diverse women across the cultures and times. The image of the Ajnu women is depicted from a turn of 20th century photo. 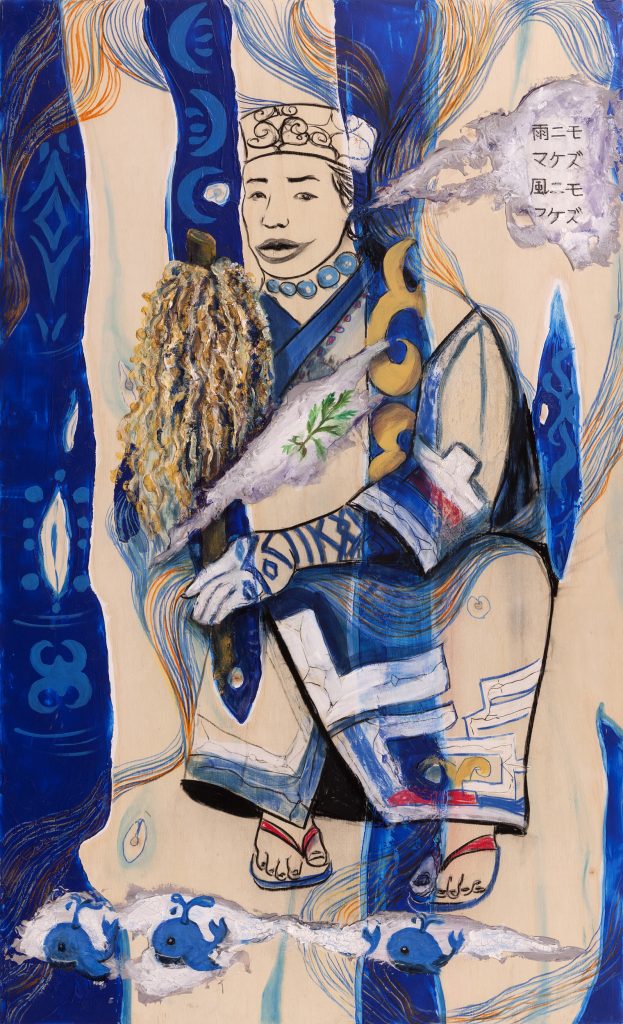 The paining embodies my experiences during research journey in Japan related to the tradition of moxibustion acupuncture practice. The Latin name is: Artemisia Princeps plant, and is also known as Japanese Yomogi or Mugwort. It has healing properties and for centuries was used for food as well as divination practice of Ajnu people from Hokkaido. The Yomogi also called Mogusa plant is depicted as an overlay of “wall plaster” over the image of the female shaman, thus depicting passage of time. The most potent mogusa grows at Hokkaido, north side of the mountains. Even though that Ajnu means “real humans”, the cultural identity of indigenous people once inhabiting all Japan, was denied their tradition for centuries and pushed to the North island, now Hokkaido.

The current politics of diverse Japan brought back the focus on the forgotten tradition and Ajnu people that were once spread over not just Japan, but Russia and into Europe. These indigenous people believed in life and that everything has a spirit kammy (kami), that became later, an integral part of Shinto belief system.  The lines that connects the front and the background of the painting are symbolic of the power that permeates everything on Earth, while flows like a water. Living by the ocean Ajnu people were depending on the food from the sea as well as on the whales and bears. The designs on the painting are originals depicting in an abstract form the power of spirits and life. The emoji whales are whimsical reference to our contemporary time, thus painted on the foreground of “ wall plaster” that is intentionally defacing the image of the past/shaman.

Ajnu Women typically would have a tattoo around the lips depicting the whale’s mouth as well as resembling moustaches, while symbolically showing that they are equal to men. She also has a traditional tattoo on her hand and arm.

While in Tokyo’s Ajnu museum and library, I was mesmerized by the beauty of designs that resonates so well with our times. I was taken away while listening to their music and language that resembles Pacific Islanders’ sounds. I know there that I will have to bring that experiences into the art works.

After all the struggles, the Ajnu people are recognized again. The Japanese calligraphy included on the top right corner on the top third ”wall plaster” layer says:

“Ame ni mo makezu” (Be not Defeated by the Rain)

This is both, the painting title and the beginning of the famous poem written by Kenji Miyazawa, a poet  and Nicharen Buddhist monk from Japan who lived from 1896 to 1933. The poem was found posthumously in a small black notebook in one of the poet’s trunks. After his death, this poem gained large popularity and stayed one of the favorite poems that Japanese of all ages identify with. I felt honored when received the book with the whole poem.

Kenji Miyazawa left his family’s wealth and nobility to live on the North with villagers, while truly practicing Nicharen Buddhism with selfless dedication for benefit of all. Ajnu people adopted this Buddhism that resonated with their own respect for life in all that surrounded us. They also kept their belief in spirit, and they prevailed all the challenges.

“Be Not Defeated by the Rain” speaks that, if practicing kindness, and good nature, the sun will come back again and the crop will grow in abundance. The poem became point of connection and wisdom that I needed to share with all the viewers of this painting that symbolizes powerful journey of kindness, humanity, that ends in strength and rebirth.

not losing to the rain
not losing to the wind
not losing to the snow nor to summer’s heat
with a strong body
not fettered by desire
by no means offending anyone
always quietly smiling
every day four bowls of brown rice
miso and some vegetables to eat
in everything
count yourself last and put others before you
watching and listening, and understanding
and never forgetting
in the shade of the woods of the pines of the fields
being in a little thatched hut
if there is a sick child to the east
going and nursing over them
if there is a tired mother to the west
going and shouldering her sheaf of rice
if there is someone near death to the south
going and saying there’s no need to be afraid
if there is a quarrel or a lawsuit to the north
telling them to leave off with such waste
when there’s drought, shedding tears of sympathy
when the summer’s cold, wandering upset
called a nobody by everyone
without being praised
without being blamed
such a person
I want to become